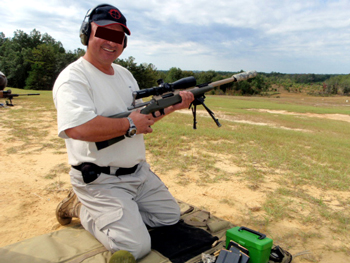 Mr. Sloan, (Texan Ballistic Guru) designed the 338 Norma loosely based on the 416 Rigby case and it is specifically designed to shoot the 300 grain Sierra Match King in a Remington 700 Long Action; without deep seating the bullet. The reason that the 338 Norma carries that title is because Mr. Sloan and Norma worked out an arrangement to have Norma manufacture the cartridge for entities inside the United States. As such, Mr. Sloan receives a small residual payment for his contribution.

I first heard of this cartridge through a rifle maker I knew who had heard whisperings about the cartridge and tracked Mr. Sloan down to discuss it. I yawned several times during our conversation, but concurred that if the cartridge was as good as he said it was, that I would take them to Ft. Benning with me as a vendor. I thought that it would be interesting to have it on the Burroughs Firing Range for the shoot day, especially since the line would be filled with .338 Lapua‘s.

The riflemaker agreed to build two, one with a 26” barrel and the other with a 22” barrel. Soon, they were delivered to the tops of the Rockies where I shot them at an elevation at and above 8,000’. They performed exceptionally well, shooting very small out to about 1,000 yards with loads developed at sea level.

The barrels utilized were built by Krieger Barrels, Inc. The twist rate was 1:9.4 and the 300 grain Sierra Match King’s chronographed from the 22” with a velocity of 2,690 feet per second. That got my attention…

I was very impressed. So, off to Ft. Benning I went. On the firing line, the cartridge again shot exceptionally well, and in my opinion, outperformed all other weapon systems and cartridges on the line. 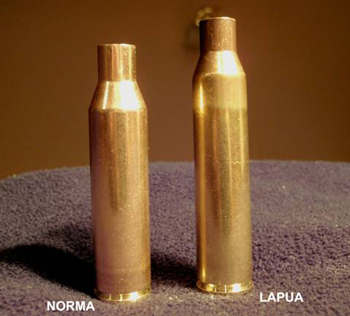 Because the rifle shot so outstandingly well, I contacted rifle maker Richard McKinney of the Schuetzen Gun Company in Drake, Colorado, and asked him to build one for me. Richard is well known for building stunning Sharps rifles for a world-wide clientele, and as you can see in the following photo, he does not have a problem with focus, follow through or attention to detail. 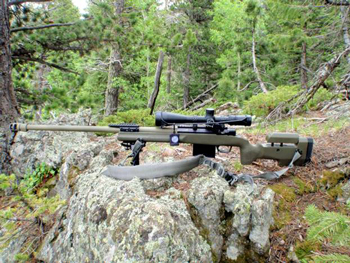 A US Army Veteran, former member of the AMU, and long range shooter, Richard was the right rifle maker for me, with a combination of experience and practice that I find unbeatable. The only other riflemaker that is of the same stature, who has built firearms for me, (in my opinion), is Jim Hoge of Canoga Park, California.

Although I did order and still have on order a barrel from Mike Rock of Rock Creek Barrels, Richard and I went down the mountain, locally, to Mark Chanlynn of Rocky Mountain Rifle Works. Mr. Chanlynn apprenticed under Barrett “Boots” Obermeyer of Obermeyer Rifled Barrels and has been manufacturing single point cut rifle barrels and building rifles too for over forty years. The one that he made for me has a 1:9.1 “left hand” twist in a heavy Palma contour.

The action as well as the bottom metal with a five round detachable magazine is from Badger Ordnance. It is their brand new M2008 long action. 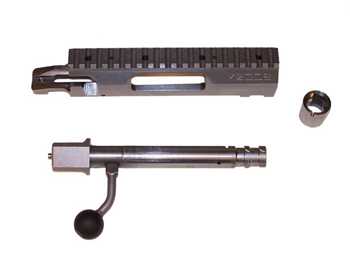 The Badger Ordnance Receiver is, as you can see, a double lug design with a cullet similar to the Mauser 98 action, and has an enclosed firing pin. The bolt lift is 60 degrees and is very quick, precise and smooth in its operation. On top is a Picatinny Specified rail with 20 minutes of angle built into it. I Love this action. Mating up to it is a Jewel trigger, set at 2.5 lbs. Although it is a little light for field use, it’s clean, crisp, and release is phenomenal.

The stock we chose was built by Tom Manners, of Manners Stocks. It is a Tactical build of fiberglass and Kevlar, is very strong and utilizes Terry Cross’s hardware for the cheek piece.

On top of the rail sits a Nightforce 5.5 – 22 X 50 NXS for the long range shooting this cartridge was designed to do and a Sniper Tools Design Company Angle Cosine Indicator. So how does it shoot? 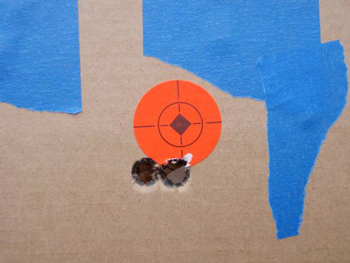 This cartridge has some amazing traits that I had never experienced before; one of which was that it is very forgiving. Whether my powder charge was 83 grains of R22 or 85, it was difficult to shoot out of a hole. The powder charge utilized above is 84.5 grains of R22 with a chronographed velocity of 2780 fps and a validated velocity of 2770 fps. The extreme velocity spread is… (You won’t believe this) three feet per second…